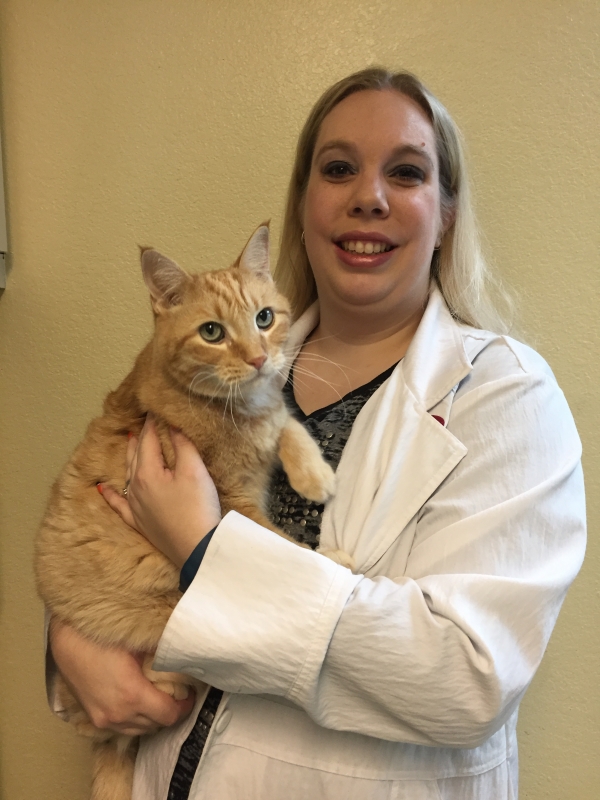 Dr. Melissa Tillotson was born in Houston, Texas and has two younger brothers. She always had pets growing up and knew after writing a career paper in 6th grade that she wanted to be a veterinarian. In high school she competed at the state and national level in Veterinary Assisting through HOSA (Health Occupations Students of America).

It was finding training for the competition she met her mentor and began working as a kennel tech/vet assistant at her clinic. She worked there through high school and went back for holidays while in college. Dr Tillotson moved to Oklahoma in 2001 to begin her undergraduate career in Animal Science at OSU. She fell in love with Oklahoma and decided to stay and go to veterinary school. She married her husband Jim in December of 2003. She graduated from OSU’s Veterinary program in 2009. While in school she was active in the Feline practitioners club, Emergency Medicine and Critical Care club, the student chapter of the American Animal Hospital Association and the student chapter of the American Veterinary Medical Association. After graduation Dr Tillotson began working at a small animal and exotic clinic in Oklahoma City. At this clinic she interned with one of the top bird and exotic doctors in the country. Over that 4 ½ years her love for exotics grew.

In the fall of 2013 she began at Perkins Road Pet Clinic and loves the staff and clients. Although she and her husband have no children yet they have a zoo of family at home. They have an 11yr old Akita named Soto; 1 Umbrella Cockatoo named Zoey; 3 Blue and Gold Macaws named Mango, Louie and Snuggles; and 3 boa snakes named Yoshi, Cerena and Cyrus. Zoey has now become a clinic pet to be a great ambassador for the exotics program. Zoey has recently been joined at the clinic by an albino snow boa to help the staff get used to the reptile part of the program. In her spare time she enjoys acrylic painting, spending time with family and friends, and riding atv’s with her husband. She is excited to be able to bring exotic experience to the clinic. Dr. Tillotson and Jim purchased PRPC a few years ago and are excited to continue great care to all the clients and patients that the clinic serves. 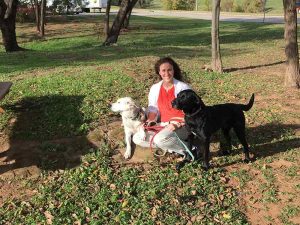 Dr. Bradshaw grew up in a small town in east-central Illinios on a grain and cattle farm. For as long as she can remember, she has always wanted to be a veterinarian. It was no surprise to her family that a love of animals flourished with all the farm critters around – cats, dogs, a goat, chickens, cattle, and pigs. She was quite active while in school, playing basketball, volleyball, and softball; she was also very active in 4-H, showing hogs every year, and the H.S.’s FFA chapter. She graduated a Valedictorian.

After graduation, she worked for a year at a mixed-animal practice in Tennessee, while Craig finished his Ph.D at Purdue. During her time there, she practiced on cows, horses, llamas, alpacas, sheep, goats, dogs, and cats. They then moved to Georgia, and Dr. Bradshaw spent the next several years at a small animal practice. Craig joined the faculty at Oklahoma State in the fall of 2016, moving them to Stillwater. Dr. Bradshaw joined the PRPC team in August of 2016.

In her free time, she and her husband are avid competitive water skiers. They are members of a ski club in Enid. When they aren’t skiing, they also enjoy spending time with their two dogs Dixie and Pete (named for Purdue Pete, not Pistol Pete, sorry Okies), hiking, scuba diving, snorkeling, snow skiing, pretty much anything outdoors, and watching movies. 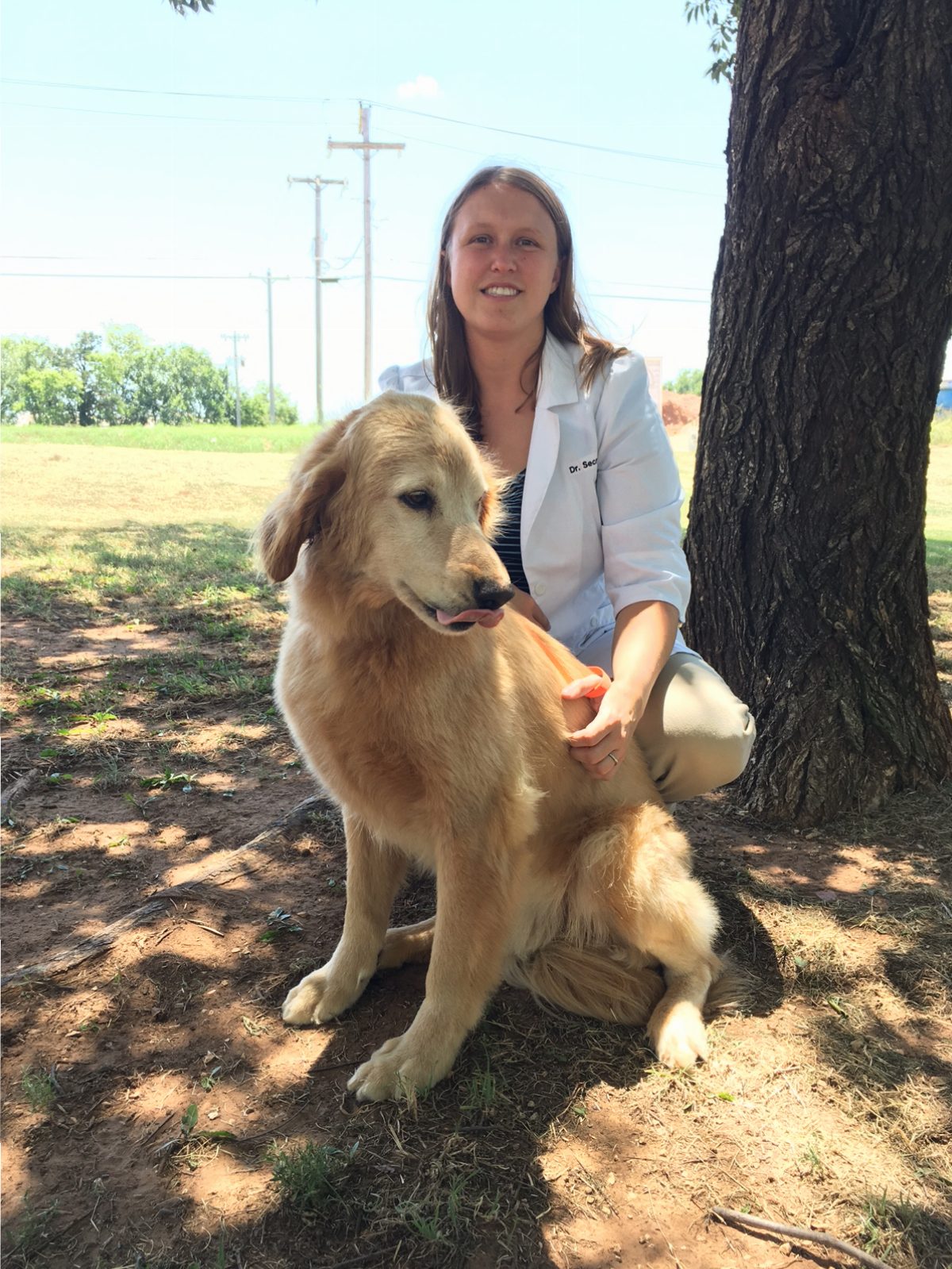 Dr. Secrest was born and raised in Enid, OK. She had a natural love for animals from a very young age even bringing in a neighborhood stray cat to be her own, at 8 years old. In 7th grade, in English class her teacher asked what she wanted to be when she grew up; her answer was, “a veterinarian”. That is when her journey to becoming a veterinarian began and she never looked back.

Dr. Secrest graduated from Enid High School in 2005. She moved to Stillwater that fall to attend Oklahoma State University where she studied Agribusiness with emphasis in Pre-Veterinary Medicine. She applied for and got into OSU’s Center for Veterinary Health Sciences after 3 years of undergraduate school. She graduated with a B.S. in Agribusiness in 2009, followed by a D.V.M. in 2012. During her years in veterinary school, Dr. Secrest served as an officer and member of the student chapter of the American Animal Hospital Association and Veterinary Business Management Association. She also served two years as the student representative of the Oklahoma Veterinary Medical Association.

Following graduation Dr. Secrest worked at a small animal practice in Midwest City for 9 months followed by 3 years at a mixed animal practice in Ponca City. She spent the past year and a half providing relief work for small animal clinics in Oklahoma City, Edmond and here at Perkins Road Pet Clinic. She began full time work here in January of 2018! Dr. Secrest is excited for the opportunity to join our team here at Perkins Road Pet Clinic and to be working in her community of Stillwater, OK!

Dr. Secrest met her husband, Justin, here in Stillwater in 2010 during her 3rd year in veterinary school. They have 2 teenagers, a boy and a girl. As a family, they raise Fullblood Wagyu beef cattle here in Payne County and enjoy spending their time on their acreage with their cattle, donkey, dogs and cat.